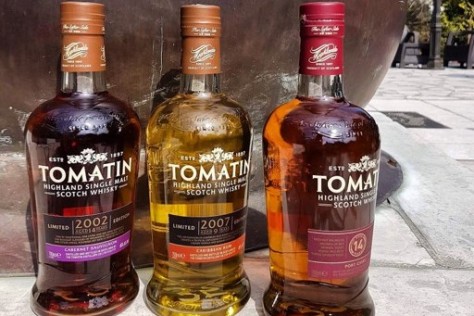 Tomatin Distillery has been producing whisky since 1897. The expansion completed in 1974 made it the biggest Scottish malt distillery but unfortunately was a major liability for the 1980s industry downturn. Tomatin went bankrupt in 1985 and the following year was acquired by two Japanese companies, Takara Shuzo and Okura & Co., who immediately reduced its distilling capacity by half. After a period of bulk whisky production Tomatin started building a brand and today offers quite impressive product range.

Tomatin 2002, 14 years old Cabernet Sauvignon Finish /46% – Here we have an interesting edition from 2016. The whisky distilled on January 25, 2002 spent 9 years in traditional oak barrels and was transferred into ex-Cabernet Sauvignon casks on March 1, 2011. Bottled of natural color and without chill-filtration at 46% abv with an outrun of 2436 bottles.

Finish: long and soothing, with notes of red fruit, cocoa, cinnamon and touch of oak.

Tomatin 2007, 9 years old Caribbean Rum Casks / 46% – Here we have a limited edition from 2016. The whisky distilled on May 18, 2007 was matured exclusively in Caribbean rum cask for 9 years. Bottled of natural color and without chill-filtration at 46% abv with an outrun of 6600 bottles.