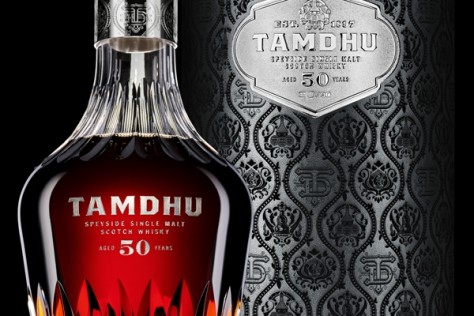 Tamdhu 50 years old / 55,6% – In 2017 Tamdhu Distillery celebrated its 120th Anniversary. The distillery was founded by a consortium of whisky blenders in 1897 and remained in continuous production (expect of the period of World War II) until the Edrington Group mothballed the site in 2010. The following year Tamdhu was acquired by Ian Macleod Distillers and resumed production in 2013. To commemorate the 120th Anniversary the distillery released 50 years old expression, the oldest ever bottled Tamdhu. The whisky was drawn from a first fill European oak sherry butt (no. 4678) filled on November 2, 1963 and bottled at natural strength of 55.6% abv in in March 2017. A team of designers worked on the whisky unique decanter: glass designer Katy Holford, crystal maker Royal Brierley and silversmiths at luxury jewelry house Hamilton & Inches. Only 100 decanters were produced, each one presented in a solid stained oak canister adorned with sterling silver. Producer’s tasting notes: