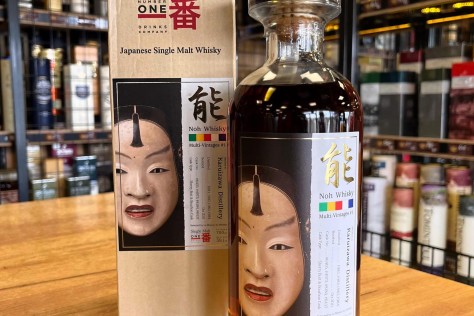 Karuizawa Distillery fired the stills in February 1956. Almost entire early production went into Ocean whisky range, blended and marketed by Sanraku Ocean Company, then the distillery owner. The Karuizawa brand was launched in July 1976 and it was the very first single malt whisky released as such in Japan. The distillery suspended operations in December 2000 and never resumed production. Karuizawa was a small outfit capable of distilling 150,000 liters of spirit per annum. At the end of the Century the distillery was in terrible condition and required considerable investment, which the owners refused to provide. Karuizawa Multi-Vintages # 1 was composed of four casks (sherry butt and bourbon barrel) filled between 1981 and 1984. The whisky was bottled at natural strength of 59.1% abv exclusively for La Maison du Whisky as part of Noh Whisky range in October 2011 with an outrun of 1500 bottles.