Today we present a unique collection of 6 whiskies:

Moon Import, importer and distributor of high-end wines and spirits, was founded in Genoa in 1980 by Pepi Mongiardino. Following the advice of late Silvano Samaroli († 2017) Mongiardino opted to be “free from the big companies”. Later he became the official distributor to Bruichladdich and later Tamnavulin and Tullibardine, preferring however to procure casks from private owners. Mongiardino bottled his first whisky in 1982 with introduction of Half Moon series. His whiskies were always beautifully labeled; he designed labels by himself inspired by images found in old books. His most famous series, such as Birds, Animals, Sea and Costumes were labeled using images discovered in an 18th Century German encyclopedia. In a statement issued in 2015 Mongiardino complained how extremely hard became obtaining high quality casks of whisky and mentioned that Moon Import ‘completed its thirty-five years of activity’. The company seems to be still active (they have recently celebrated 40th Anniversary with the release of 2007 Caol Ila) however their whisky selection has been significantly reduced. The Animals, one of the most beautifully designed Moon Import whisky series, was originally released in 1989-1990. It consists of six single malts, all bottled at 46% abv. Only 600 bottles of each expression were produced.

· Tobermory 1972 (the distillery was then owned by Pedro Domecq and Liverpool Shipping Company) aged in oak casks 1527-31 and bottled in 1990;

· Bunnahabhain 1964 (the distillery was then owned by Highland Distillers Company Ltd.) aged in hogsheads 423-425 and bottled in 1989;

· Dunglass 1967, bottled 1990, one of the rarest whiskies on the market, an experimental, lightly peated single malt distilled at the Littlemill Distillery for a short period of time in the late 1960s. The distillery was then owned by Duncan Thomas and Chicago-based Barton Brands Ltd. Dunglass was never officially bottled and just a handful of casks found its way to the market through independent bottlers. Dunglass The Animals Edition comprises whisky from three oak casks, nos. 3447-050. 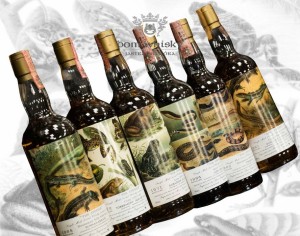