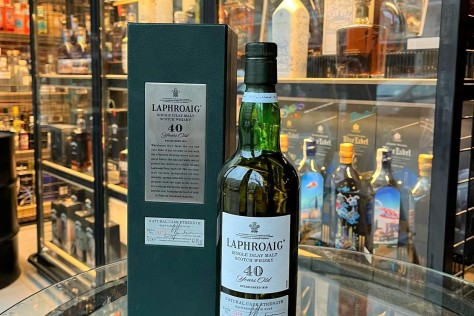 Laphroaig Distillery was established in 1815 by Alexander and Donald Johnson from Clan Donald.

The last member of the family who run the distillery was Ian Hunter (nephew of Sandy Johnston). He died childless in 1954 and left the distillery to Elizabeth “Bessie” Williamson, one of his managers. Bessie, Glasgow University graduate, had been given all distillery secrets and those days was the only female running the distillery. In 1959, right after harvest, she bought from the local farmer an excellent batch of barley (Golden Promise variety), which was processed through own maltings.

The batch was distilled in March 1960 and filled into European oak hogsheads. The barrels were laid in No. 1 warehouse, cool and damp, sitting right by the ocean. After four long decades of aging in such environment the alcohol level in whisky decreased to 42.4% and so did the content of the barrels, due to angel’s share it dropped by roughly 50%. Laphroaig 40 years old was bottled on May 29, 2001 and is the oldest official bottling from the distillery.

Only 3300 bottles were produced and today they are priceless. Each comes with a certificate signed by Iain Henderson, then distillery manager.