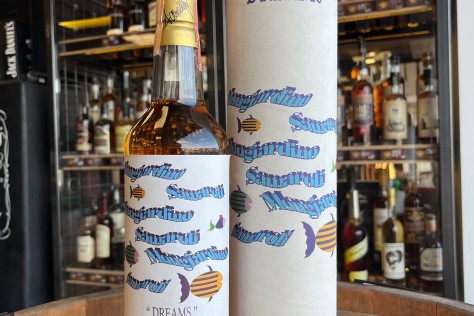 Do you remember what you dreamed about in 1999?! One thing is certain, the bottle we are mentioning today is the dream of many whiskey collectors, not only because of its name…

The Dream series was introduced in 1999 as a collaborative effort between two iconic whisky bottlers (and privately friends), Pepi Mongiardino and Silvano Samaroli.

The former founded Moon Import in 1980 and following the advice of Silvano Samaroli († 2017) opted to be “free from the big companies”. His whiskies were always beautifully labeled; Mongiardino designed most labels himself inspired by images found in old books. Samaroli, on the other hand, entered whisky business in 1968. With incredible taste for single cask whiskies he is regarded by many as a visionary. Most of early releases of Samaroli and Moon Import are considered as “whisky greats” and are desperately sought after by collectors.
The unique label on Samaroli/Mongiardino 1975 Dailuaine Dreams was designed by Nadia Pini and Hans Piu. We do not know much about the whisky itself but since it has been approved by two most revered whisky personalities, we assume it is exceptional. Only 594 bottles were produced. At one point Mongiardino admitted that ‘Dreams’ was his favorite series.