New whiskies for tasting in Warsaw 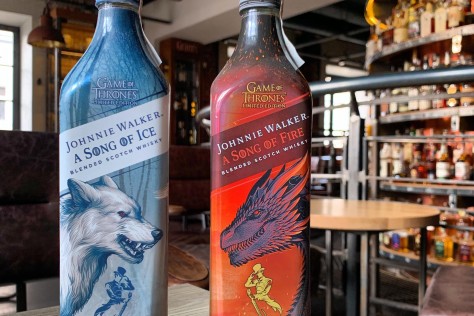 Buy bottles at Dom Whisky Online or in our whisky shop in , RedaWejherowska 67
https://sklep-domwhisky.pl/search.php?text=song

Johnnie Walker Game of Thrones A Song of Fire / 40,8%/ – A Song of Fire is inspired by the dragon commanded by Daenerys Targaryen, known as ‘Mother of Dragons’. Containing peated malt whisky from Caol Ila Distillery the blend features “subtle smoke tempered by a rich, rounded sweetness”.

Johnnie Walker Game of Thrones A Song of Ice / 40,2%/ – A Song of Ice is inspired by the direwolf, used as a sigil for the House of Stark. Containing single malt whisky from Clynelish Distillery the blend is described as having “a crisp, clean taste with a green and grassy flavor and notes of vanilla and tropical fruit”

Finish: not too long, with notes of vanilla, citrus and oak.