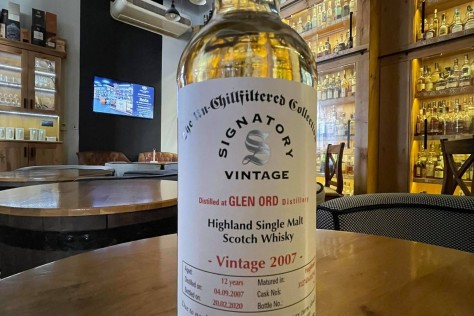 GlenOrd 12 years old (D.2007, B.2020) Signatory Vintage /46%/ – An expansion completed in 2105 made Glen Ord the second largest malt whisky distillery in Diageo’s portfolio after Roseisle – equipped with 14 stills Glen Ord can produce 11 million liters of spirit per annum. Glen Ord has been part of the Singleton brand since 2006 and its popularity in Asia has been tremendous. The Singleton sells over six million bottles annually divided by three sub-brands: Dufftown, Glendullan and Glen Ord with the latter being the most popular. There has not been many independent bottlings of Glen Ord lately, here we have one from Signatory Vintage. The whisky distilled on September 4, 2007 spent over 12 years in hogsheads nos. 312743 and 312744 and was bottled as part of the Un-chillfiltered Collection on February 20, 2020.