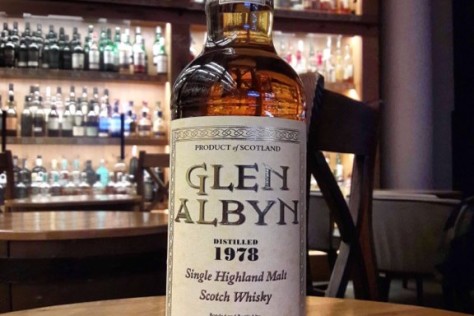 #GlenAlbyn 1978 (Bottled 2008) / 46%/ – Glen Albyn Distillery (Albyn or Albion is an old name for Great Britain) was founded by James Sutherland, the Provost of Inverness in 1844, on site of the ruined Muirtown Brewery. The distillery buildings were sitting close to Caledonian Canal, opposite Glen Mhor Distillery. In 1857 Sutherland went bankrupt and the distillery remained silent until 1884 when rebuilt and newly refurbished resumed production. Glen Albyn and Glen Mhor operated together under ownership of Mackinlay & Birnie Ltd from 1920 until 1972, when DCL acquired them. The maximum annual output of the former was a little over 1 million liters of spirit however during the later years the distillery was running at roughly 30% of its capacity. Glen Albyn was among a sheaf of distilleries mothballed by DCL in the early 1980s and closed in 1983 never to reopen. It was demolished three years later and the site developed for a supermarket. The vast majority of Glen Albyn malt went into Mackinlay’s blends, the only official single malt bottling turned up in 2002 as part of the Rare Malts range.
Here we have Glen Albyn distilled on July 31, 1978 and aged in refill sherry butt no. 2714 for three decades. Bottled by Gordon & MacPhail on August 25, 2008 with an outrun of 294 bottles.