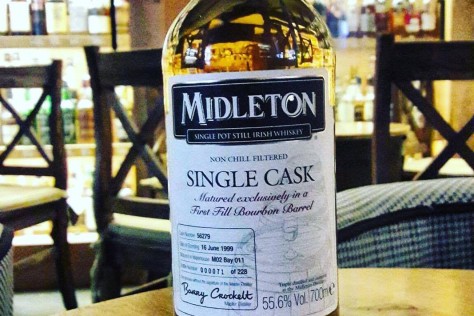 Midleton 1999 Single Cask / 55,6% – Midleton is by far the biggest Irish distillery producing malt, pot still and grain whiskeys in one facility. Single pot still is the most traditional Irish whiskey; it is distilled from mash made of malted and un-malted barley. Midleton produces different styles of pot still whiskey while adjusting the middle cut separation from foreshots and feints. Here we have truly unique single cask bottling. The whiskey distilled on June 16, 1999 was aged in first fill ex-bourbon barrel (no. 56279) and bottled at natural strength of 55.6% abv for the German distributor Irisch Lifestyle GMBH on September 21, 2012. Only 228 bottles were produced.