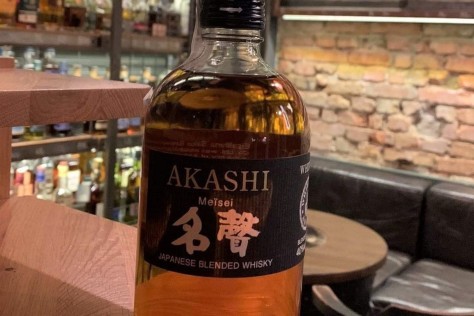 Akashi White Oak Meisei Japanese Blended Whisky /40%/ – Eigashima Shuzo was founded in 1919, which could make it the oldest whisky company in Japan, older than Yamazaki (1923). However, Eigashima Shuzo is primarily a manufacturer of sake and shochu. Their first single malt whisky was launched only in 2007, nearly a century after the company was founded. The White Oak Distillery, the one within Eigashima Shuzo dedicated to whisky production, was built in 1984 in Akashi in Hyogo Prefecture. Having experimented with various peating levels, the distillery now uses lightly peated malt (5 ppm). The whisky matures in on-site warehouses, on the shores of Akashi Strait, a stretch of water between the island of Honshu and Awaji. Akashi White Oak Meïsei is a blended whisky, composed in 45% of malt whisky matured in ex-bourbon casks. The Japanese word “meïsei” means a celebrity, fame.Nose: Delicate, with the notes of vanilla, oak and some fruitiness.

Palate: Vanilla sweet, with some spices, oak and sponge cake.