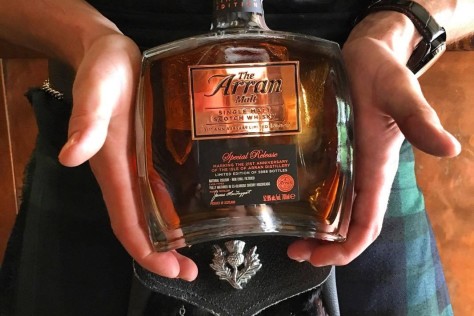 Arran 21st Anniversary Limited Edition / 52,6% – Arran is one of the very few privately owned Scottish distilleries. It was founded in 1993 by Harold Currie and started production in August 1995. To commemorate the 21st Anniversary James McTaggart, the company master distiller, selected the oldest ex-Oloroso sherry hogsheads filled within the first three years of production. The anniversary edition is a very fruity and citrusy whisky; a perfect dram to celebrate ones birthday and the decanter style bottle adds a touch of luxury to the presentation. Arran 21st Anniversary was released at natural strength of 52,6% abv with an outrun of 5988 bottles and sold out immediately.

order bottle at Dom Whisky Online or buy in our whisky shop in Reda, Wejherowska 67.
(https://sklep-domwhisky.pl/product-pol-12972-Arran-21st-Anniversary-Limited-Edition-52-6-0-7l.html)