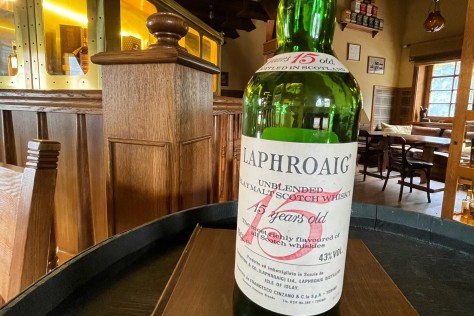 Laphroaig 15 years old, Unblended Islay Malt (Bottled for Francesco Cinzano & C.) / 43% / – Laphroaig Distillery was founded in 1815 by the Johnston brothers, Alexander and Donald. Until 1954 the distillery remained in hands of the founding family (Johnston/Hunter). The last in line, Ian Hunter, doubled its capacity and substantially increased export. Currently Laphroaig is part of Beam Suntory, the third largest producer of alcoholic beverages in the world, and equipped with seven stills produces roughly 3.3 million liters of spirit per annum. The 15 years old expression was part of the core range since the 1980s and it was usually described as mellower version of Laphroaig 10 years old. The bottle presented here dates from the early 1980s and most likely contains whisky distilled before 1972, the year that legendary Bessie Williamson retired, and was part of the shipment for then Italian importer Francesco Cinzano & Compania.

Buy bottle at Dom Whisky Online or in our whisky shop in Reda, ul. Wejherowska 67.
https://sklep-domwhisky.pl/product-pol-24723-Laphroaig-15…