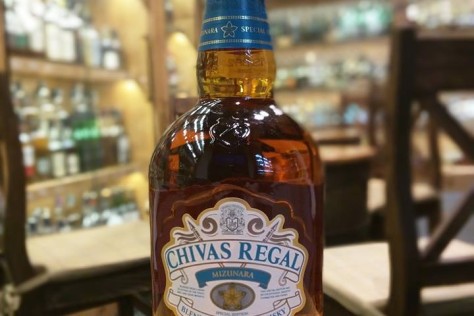 Chivas Regal Mizunara / 40% – In the 21st Century we experienced something what in the recent past would sound like a blasphemy – Japanese whiskies keep beating their Scottish competitors in blind tastings. Subsequently some Scottish producers has been turning their attention to Japan in search of inspiration. One of them was a legendary Chivas Bros. master blender, Colin Scott, who on his trip to Japan got the idea of creating version of Chivas Regal with the Japanese flair. He selected grain and malt whiskies (according to Chivas formula) and then finished part of his blend in Mizunara (Japanese) oak. Mizunara oak grows very slowly, it is porous, expensive and rare thus pretty seldom used for whisky aging. Chivas Regal Mizunara was released in October 2014 in Japan and we believe that it was the first Scottish blend, which has incorporated Japanese oak.

Buy the bottle in our online shop: (https://sklep-domwhisky.pl/product-pol-12736-Chivas-Regal-Mizunara-Blended-Scotch-Whisky-40-0-7l.html)