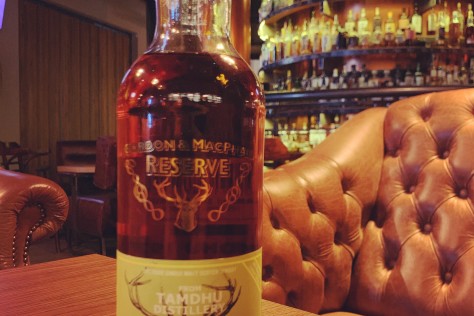 Tamdhu​ 1973 (Bottled 2008) Gordon & MacPhail Whisky​ Reserve / 56%/ – The distillery produces roughly 4 million liters of spirit per annum with majority of the output going into various blended whiskies. Tamdhu very seldom makes front page news but some single cask releases, particularly ex-sherry casks, are sought after and praised by whisky aficionados. The distillery was founded in 1896 by consortium of whisky blenders including William Grant & Co, John Walker & Sons, Robertson & Baxter to name a few. Just two years later it was taken over by The Highland Distillers Company and throughout the entire 20th Century (except period of closure from 1927 to 1948) supplied malt to various blended whiskies including such high volume brands as Cutty Sark, Famous Grouse and J&B. Since 2011 the distillery has been owned by Ian Macleod Distillers, which within few years made Tamdhu single malt globally available. Tamdhu 1973 just proves tremendous potential and highest quality of the distillery. The whisky distilled on April 20, 1973 (just a year after the number of stills was increased to four) was aged in first fill sherry butt no. 3230 for roughly 35 years. Bottled on April 1, 2008 at 56% abv by Gordon & MacPhail as part of Reserve series with an outrun of 481 bottles.

Buy bottle at Dom Whisky Online​ or in our whisky shop in Reda, Wejherowska 67
https://sklep-domwhisky.pl/product-pol-17040-Tamdhu-1973-Bottled-2008-Gordon-MacPhail-Reserve-56-0-7l.html