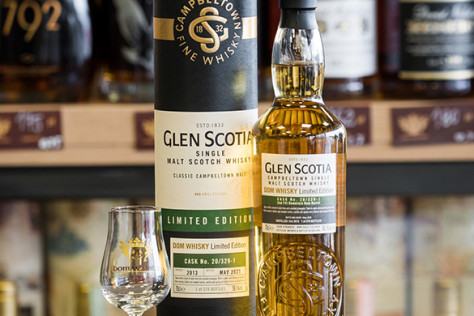 We introduce You to our special, limited birthday edidion!

In 2021 Dom Whisky Jastrzębia Góra celebrated its twelfth Anniversary. Founded in 2009 in the picturesque coastal village, the place earned cult status right from the day one. Dom Whisky is a mandatory destination for anybody even slightly interested in “water of life”; our patrons often call it “a whisky temple” (the description we are proud of). Our selection features several thousand whisky expressions from all over the world. To commemorate our anniversary we selected a barrel of whisky from the distillery located in the smallest whisky production region in Scotland, formerly known as ‘Whiskypolis”. Our choice was Glen Scotia, whisky distilled in October 2013 and aged in bourbon barrel and finished for 12 months in second fill Demerara Rum barrel # 20/329-1. The whisky was bottled unfiltered at natural strength of 58.1% abv in May 2021 with an outrun of only 276 bottles. We believe you will enjoy our anniversary dram. Slàinte Mhath!

Buy bottle at Dom Whisky Online or in our retail whisky shops in  Warsaw, Wrocław and Reda.