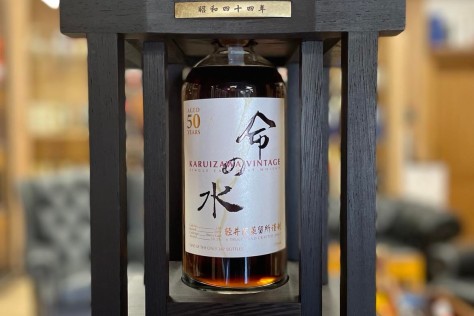 As you know, our Dom Whiskey Online is constantly expanding its offer with unique and limited whisky editions. One of them is undoubtedly Karuizawa Vintage 50 years old.

Karuizawa Distillery fired the stills in February 1956. Almost entire early production went into Ocean whisky range, blended and marketed by Sanraku Ocean Company, then the distillery owner. The Karuizawa brand was launched in July 1976 and it was the very first single malt whisky released as such in Japan. The distillery was mothballed in December 2000 and never resumed production. Karuizawa was a small outfit capable of distilling 150,000 liters of spirit per annum. At the end of the Century the distillery was in terrible condition and required considerable investment, which the owners refused to provide. Karuizawa distilling license expired in 2012 and at the same time Number One Drinks Co. acquired the remaining stock (about 360 barrels), the most of which would be bottled as single cask editions. Twenty casks were bought by Taiwanese businessman and whisky collector, Eric Huang.
The whisky presented here was distilled in 1969 and aged in ex-sherry cask for a half of a century, then bottled at natural strength of 59.2% abv in 2019. The cask produced 473 bottles. Karuizawa holds record of the most expensive Japanese whisky sold in auction – in March 2020, a bottle of 52 years old single cask Karuizawa (cask # 5627) fetched £363,000 ($435,000) at Sotheby’s in London.
#karuizawa #japanesewhisky #singlemalt #domwhiskyonline #maszwybór #luxuryspiritsshop #whiskyshop #ponad10000butelek #collectiblewhisky #limitededition #whiskykolekcjonerska #oldandrare #rarewhisky #rareedition #limitiwanaedycja #cottlectorsedition #białykruk