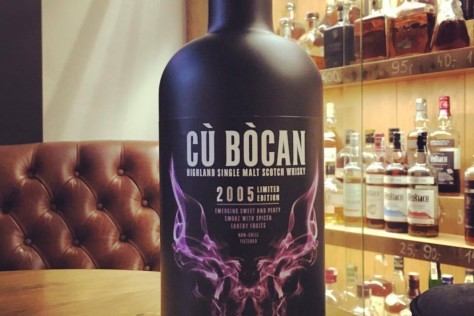 Tomatin Cù Bòcan 2005 Vintage / 50% – The Cù Bòcan brand was introduced in 2013 as a moderately peated alternative to the traditionally fruity standard Tomatin expressions. The whisky was named after mythical hellhound, which was rumored to haunt the residents of the village of Tomatin. As the company sales director stated, Tomatin started distilling peated whisky in 2005 with the intention to use it for “on-site blending activities but since the maturation process exceeded expectations the decision was made to release it as single malt”. The 2005 Vintage Limited Edition is a vatting of ex-bourbon and ex-sherry casks bottled without chill-filtration at 50% abv in 2016. Only 11400 bottles were produced.

Nose: butterscotch, toffee apples and honey are met with a hint of vanilla that binds these big sweet flavors together. The faint smoke of heather burning lingers in the background throughout. In time, chili infused chocolate, lemon syrup and a very slight hint of smoked bacon emerge.

Palate: a burst of candy floss and birch sap sweetness is complimented by a gentle touch of peat smoke, which brings a rounded earthy note to the taste. Dark chocolate, winter spice and poached fruits leave a warming suggestion of Christmas pudding.

Finish: rounded and full. The combination of sweet and smoke is left to evolve on the palate with soft fruits continuing to play a role.