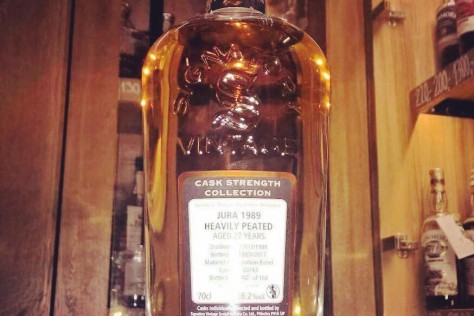 Jura Heavily Peated 27 years old (D.1989, B.2017) Signatory Vintage/ 58,2% – Jura Distillery was built on the namesake island in 1810. It was dismantled in 1901 and remained silent until the early 1960s, when Charles Mackinlay & Co rebuilt and refurbished it. Since 1993 Jura Distillery has been owned by Whyte & Mackay and equipped with two pairs of stills produces about 2.2 million liters of spirit per annum. Jura whisky has not been generally associated with peat smoke but every year few batches are distilled from malt with phenols’ content up to 50 ppm. Here we have Signatory Vintage bottling containing ‘heavily peated’ whisky distilled on December 17, 1989 and aged in ex-bourbon barrel no. 30743. On January 18, 2017 the barrel yielded 168 bottles of cask strength whisky (58.2% abv).