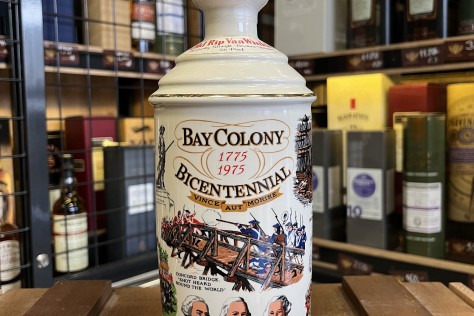 This time we present to you one of the rarest edition from the bourbon category.

Julian “Pappy” Van Winkle passed away in 1965 and left the company to his son, Julian Van Winkle II. Times were pretty bad for whiskey producers in the U.S., in fact the popularity of bourbon reached the bottom.

Due to lacking demand, Julian was forced to sell Stitzel-Weller Distillery and its brands to Norton-Simon in 1972 for roughly $20 million. He was able to retain one brand, the pre-prohibition Old Rip Van Winkle, which he soon re-launched. The new owners granted him the office space and license to continue bottling Stitzel-Weller stock on site and Julian started acting as Independent Bottler. His son Julian Van Winkle III joined him in 1975. Since bourbon was in such low demand, father and son did not introduce an extensive product range and focused on limited commemorative editions and private bottlings presented in old fashioned decanters. These decanters were always filled with Stitzel-Weller bourbon.

Here we have an incredible piece of American whiskey history, a limited edition of 1975 decanter celebrating the Bay Colony Bicentennial. The decanter made by Cumberland Porcelain depicts pictures of historic scenes, such as the Boston Tea Party, battle of Lexington and Concord and the motto from Bedford Flag “Vince Aut Morire” (Conquer or die). Should we mention the historic content of the decanter? The whiskey distilled by “Pappy” Van Winkle’s son Julian in Stitzel-Weller Distillery, which closed for good in 1992 and its inventory is long gone.