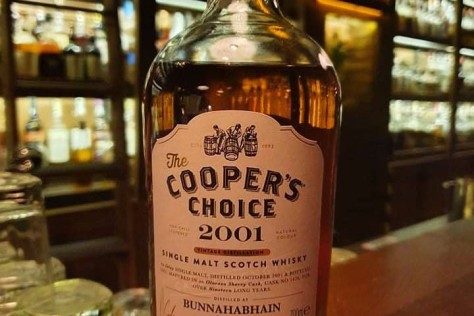 The Cooper’s Choice Bunnahabhain 19 years old (D.2001, B.2021), Sherry Cask Matured, / 50,5%/ – The Cooper’s Choice is the range of single malt and single grain whiskies bottled by The Vintage Malt Whisky Company (founded by Brian Crook in 1992). The range was launched the following year and is the company homage to coopers and their important role in the Scotch whisky industry. Bunnahabhain 19 years old, distilled October 2001, was aged in ex-Oloroso sherry cask # 1426 and bottled at natural strength of 50.5% abv of natural color and without chill-filtration in 2021 with an outrun of 300 bottles. Bunnahabhain Distillery, founded 1881, sits on the west coast of Islay. The distillery is owned by Burn Stewart Distillers (now subsidiary of Distell Group) and equipped with two pairs of stills can produce 2.7 million liters of spirit annually.

Order bottle at Dom Whisky Online or in our retail whisky shops in Reda, Warsaw or Wrocław
https://sklep-domwhisky.pl/product-pol-25533-Bunnahabhain…