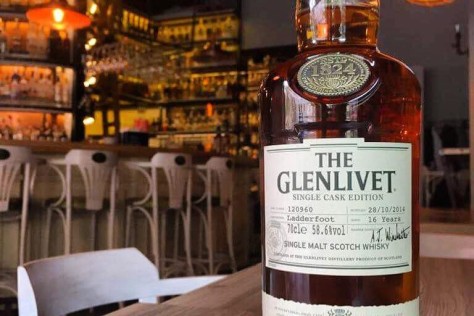 The Glenlivet Ladderfoot 16 years old / 58,6% – The Glenlivet, founded 1824, is the oldest legal distillery in Speyside. It is currently owned by Chivas Bros., subsidiary of Pernod Ricard, and equipped with seven pairs of stills produces over 10 million liters of spirit per annum. In 2015 the company announced expansion with a goal to triple distilling capacity. The Glenlivet is the second best selling single malt with annual sales little over one million cases. In recent years the company has been supplementing its core range with limited releases, some of them single cask. The one presented here comprises whisky aged in ex-sherry butt # 120960 for 16 years and bottled at natural strength of 58.6% abv on October 28, 2014. The whisky takes its name from the Ladderfoot farm located in the Livet valley.

Order bottle at Dom Whisky Online or buy in our whisky shop in Reda, Wejherowska 67
https://sklep-domwhisky.pl/product-pol-16268-Glenlivet-16-letni-Ladderfoot-2014-Release-58-6-0-7l.html