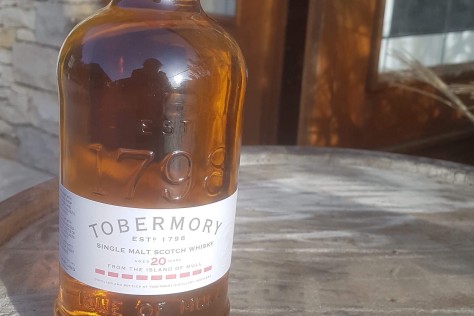 Tobermory 20 years old / 46,3%/ – Tobermory Distillery is beautifully located on the Inner Hebridean Isle of Mull. It was founded in 1798 but became fully operational in 1823. Throughout the 20th Century the distillery experienced lengthy period of closures and several changes in ownership. Between 1972 and 1993 two of its three owners filled for bankruptcy and the production was very erratic. Burn Stewart Distillers, which took over in 1993 keeps the distillery running at roughly 75% of its capacity producing about 750 000 liters of spirit per annum. The distillery supplies whisky to Black Bottle and Scottish Leader blends and single malt offerings are strictly limited. Tobermory 20 years old was introduced in 2016 and comprises whiskies aged in ex-sherry casks.

EBuy bottle at Dom Whisky Online or in our whisky shop in Reda, Wejherowska 67.
https://sklep-domwhisky.pl/product-pol-12754-Tobermory-20-letni-46-3-0-7l.html