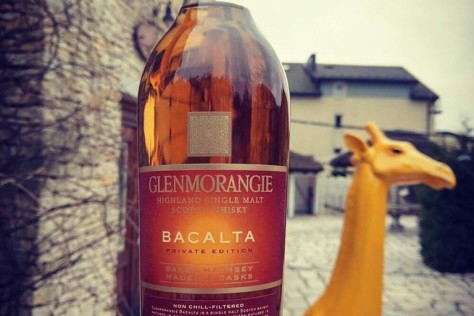 The Glenmorangie Bacalta, Private Edition 46% – Bacalta (Gaelic for ‘baked’) launched in the early 2017 was the eighth release in hugely admired Glenmorangie Private Edition series. As with the previous releases in that range Bacalta was a creation of Dr. Bill Lumsden, the Director of Whisky Creation at Glenmorangie. The inspiration came from discontinued since 2004 Glenmorangie Madeira Wood Finish. This time Mr. Lumsden used ex-Malmsey Madeira casks for the final stage of aging. They were filled with wine and left to ‘bake’ in the sun of the island of Madeira for two years. The casks were emptied then, transferred to Scotland and filled with Glenmorangie whisky aged for roughly 10 years in ex-bourbon barrels. Two years later Bacalta was born, as Dr. Lumsden says “a burst of sunshine in a glass”.

Buy the bottle in our Dom Whisky Online Shop (https://sklep-domwhisky.pl/product-pol-12841-Glenmorangie-Bacalta-Private-Edition-46-0-7l.html)